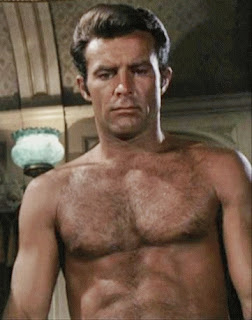 He played James West, the handsomest man I'd ever seen, with the bluest eyes I had ever seen.

That combination, plus watching him defeat armies of thugs every week, made me want to spend my life with him. Because this was back in the mid 1960's, I knew nothing about being gay. I just knew I loved James West more than anything in the world. It took me a few more years to realize that the latter meant the former.

To this day, I still think about this TV show, and I'm not alone: there are websites devoted to the same gay crush. And there always will be, as long as there is an Internet and gay men...

wow, I had forgotten about one of the greatest asses of all time. Thanks for the reminder!

I grew up on a U. S. Marine Corps base, but had never before seen such a manly, handsome, funny and smart man in my life.

Seeing him in living color confirmed in me, probably for the first time, that the boys in school might be right, that I was a q***r.

Of course, rubbing one off after (and sometimes during) each episode also contributed to that realization.

Let's not forget Blacksheep. Still rock solid and waiting. Most of the shirtless scenes had him in khaki boxers, but that jumpsuit emphasized from all angles. In lots of scenes when he's walking towards the camera it looks like he was commando, because the bulge has a life of its own. Love the scenes shot from the back where he's with Oakland. That butt is awesome, and he was, what, mid 40's? Hot as hell! Anytime, anywhere.

Probably my first crush, too (not sure if it was "Batman and Robin" or James West!) Didn't realize he was a crush until later -- I thought I wanted to BE like him .. later realized what I really wanted was to be WITH him... I read somewhere that the production was set up to make him appear taller (6') when he was actually shorter (5'7" or 8"), which is a height I prefer for a guy -- so I have a stronger crush on him now! (He didn't age too bad, either: there are some nice photos of him out there.) Thank heaven for celluloid and DVD -- I can watch him (and Pause him...) whenever I want! : )