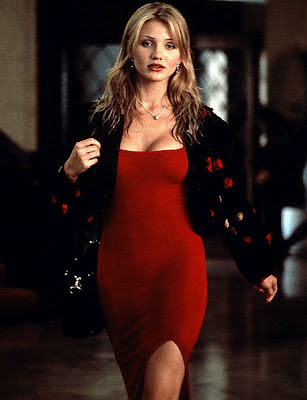 I was 7-years old when a friend of my parents' had taken my sister and I to see "The Mask."

Afterwards, when she asked us each what we thought about the movie, my only response was:

"The pretty blonde lady made my tummy feel funny."


I don't remember saying this, but I do remember feeling happy and warm the whole rest of the night.

The truth is, I was stunned by the gorgeous blonde in a red dress, who danced like no one I'd ever dreamed of. She was sexy, she was smart, and she was troubled.

I would learn later in life that "troubled" is something I'm not only drawn to, but feel a strong urge to rectify. But most of all, she was mesmerizing.

It didn't matter that she worked for some sleazy guy, was forced into a relationship with him, or that she wasn't particulary well-spoken. When Cameron danced, sang, or even just walked into a room, everything else just kind of melted away.

My younger self seemed to have a strong affinity for blondes (Hello, Kelly Taylor!), and although I'm primarily drawn to brunettes nowadays, I will never forget that night -- or that red dress!

Inspired by the "Born This Way Blog" - BornThisWayBlog.com 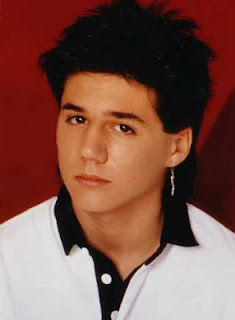 As a kid in a small town in N. Carolina, music was my outlet. It was the 1980's, and pop music was totally AWESOME! I compulsively listened to pop radio, and I would just dance and dance.

"Kids Incorporated" was my favorite TV show on Sundays, and Ryan Lambert was just so adorable! He played guitar and had really great hair!

He was just rocker enough to be compelling - but wasn't threatening to a boy who practiced dance routines to Madonna, Stacey Q, and Debbie Gibson in his room.


I liked his voice and I imagined he was my dreamy boyfriend, so I could dance and play tambourine with him on stage. The intersection of sex, art, and music began for me with the very cute Mr. Ryan Lambert.

Inspired by the "Born This Way Blog" - BornThisWayBlog.com
Posted by DJ Paul V. at 1:05:00 PM 0 comments 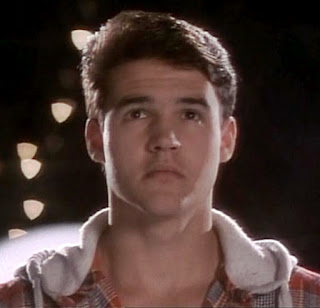 I was 6 in 1993 when "Mighty Morphin Power Rangers" first aired, and every Saturday morning I would plop down in front of the TV to watch it.

Jason had defined muscles, a deep timbre to his voice, and he was strong and great at martial arts. Although I didn't know it at the time, I would say that he represented a perfect masculinity to me.

Though I didn't have any tangible sexual attraction to men or women, I was drawn to Jason. While all of my male friends talked about how pretty Kimberly the Pink Ranger was, I would just stare at Jason's arms and face while giving non-commital answers to the others.

We would get together in my backyard and pretend to be Power Rangers. I refused to be the Red Ranger and always played Billy (Blue Ranger), because I identified more as a geek. Plus, I couldn't pretend to be the person that I loved; that would have been too weird.

Austin St. John left the series in season two, and my heart broke. And I nearly fell off of the couch when I saw him return in 1996. By that point, I knew for sure that I was different than the other boys in school, but I rationalized my crush as, 'Oh, you just want to grow up to look like him.'

After all of these years, I still occasionally have dreams about being with him. In them, I'm jogging and I get attacked, and Jason comes and saves me in his red uniform. After saving me, he removes the uniform, and well - I'm sure you can imagine the rest...

Inspired by the "Born This Way Blog" - BornThisWayBlog.com
Posted by DJ Paul V. at 4:19:00 PM 1 comments