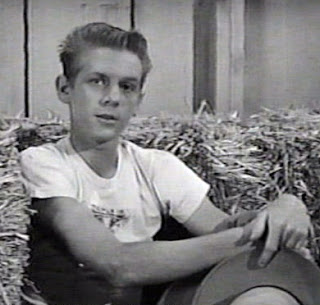 "Spin and Marty" was an inclusion in the "Mickey Mouse Club" around 1955.

The setting was
a perfect fantasy: A summer camp and a dude ranch with horses.

My crush was on Marty, the blond, boyish, effeminate outcast.

Spin was very masculine, from a poor urban family, who "spins" the lasso well. Marty was basically the femme to Spin's butch, the sissy spoiled rich kid. Gradually, Marty learns to become "one of the guys." 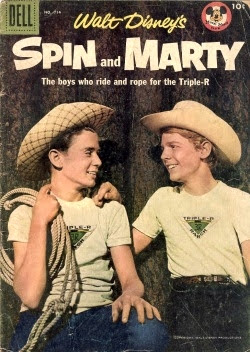 Other guys I've talked to mostly liked the more manly Marty. So this one is still a little embarrassing among my bear friends.

Everything was basically a secret in my family, including this crush of mine, so keeping this a secret was no problem.

I liked several other boyish, 1950's TV guys, including Dean Jones in "Ensign O'Toole" and Jackie Cooper in "The People’s Choice." 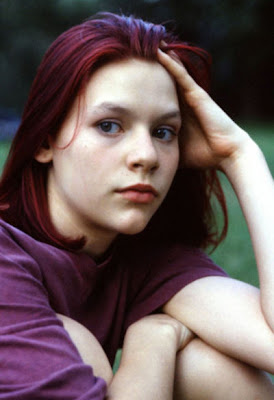 Watching "My So Called Life" at age 13 in the early 90's, I thought I wanted to be Claire's character, Angela Chase.

It was that age-old lesbian conundrum:

She was deep, she was alternative, she was cool, and she wore flannel.

I wanted it all - except NOT Jordan Catalano. I hated that she liked Jordan, then it dawned on me that I was just jealous. That's when I first thought I might be gay (and perhaps a little too into the show).


Also, Angela Chase was solely responsible for my horrible flannel phase in my early teens. Hey, it was the 90's, so give me a break.

I never told anyone about my crush, until recently.
I find myself still having a thing for alternative girls, which I will always attribute to Claire Danes.

I had my first gay crush on actor Johnny Crawford. 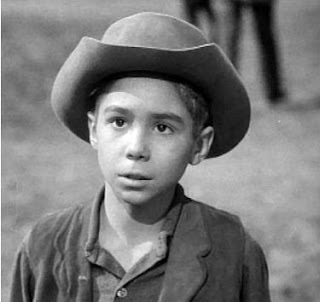 I grew up in Iowa, and when I was around 10-years old, my crush was on his character, Mark McCain. And I loved him so much!

Whenever he cried on the "The Rifleman," I just wanted to hug him and kiss him all over.

I loved his pouty mouth, and that sexy, hurt crack in his voice.

This crush on Johnny was part of my secret life, so no one ever knew I loved him until years later when I told gay friends. It turns out, lots of other gay boys loved Mark McCain, too. But I didn't know that at the time.

Besides, back then - Mark was mine alone!

Inspired by the "Born This Way Blog" - BornThisWayBlog.com
Posted by DJ Paul V. at 2:09:00 PM 2 comments